The ugliest 24 hours in blood sugar-land

This is the nastiest looking graph for a D-mama. 24 hours above the dotted line. 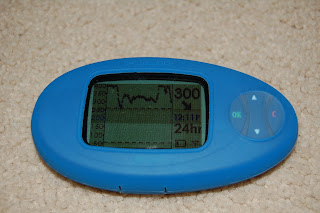 This was a first for us after 3 months of diabetes. There's a first time for everything, right? I think the anesthesia really did a number on him, because no matter how much insulin I gave him, he wouldn't budge. His endo had me up his Levemir by one unit and lower his carb ratio, but today we still only got below 200 once. He's now sleeping and back up to 268. Over the last few months, we've given him an average of 7 units of insulin a day, including his Levemir. Today he got about 18 units total. Cuh-ray-zay.

Or he could be fighting infection....or he could just be really needing more insulin. There are so many variables. I am SO SO glad we had the Dex for the surgery. I feel like I can keep better tabs on him. He's just had some trace amounts of ketones, but I guess that could make him more insulin resistant too.

Adam's doing okay. His eye looks soooo painful and basically the entire white of his eye is blood red. He's not complaining about it, so I know it just looks worse than it is. He's still his spunky self. 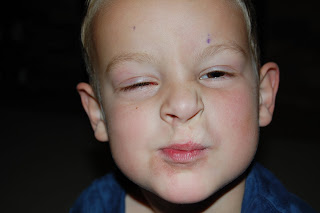 It's back to the numbers game tomorrow. Hopefully they will be on our side!
Posted by Stephanie at 9:39 PM