Why is it so hard?

I know Adam has diabetes.

I know he needs insulin every time he eats in order to live.

I don't understand why, when hovering over the "Go" button on his pump, I hesitate to give him 5 units of insulin for his lunch.

Pushing it means "Holy shit, he really does have diabetes. And this is a butt-load of insulin."

Why is it so hard, 7 months later, for me to accept that fact? Why now?

Maybe because in the beginning, 1 unit did the trick. We were warned of the perils of giving him too much. I'm terrified to give him too much and kill him. Yeah, that may be overly dramatic, but it's true.

I finally emailed his endo yesterday with his numbers...I don't know why it took me so long to ask for help. I'm not good at that. Even if that is what they are there for. I feel like I've been conditioned to "know" what I'm supposed to do for Adam's diabetes, when 90% of the time, I don't. I assumed that he needed a huge basal increase, but what his doctor responded with was to change his carb ratios.

And doggone it, he was right.

Sheesh, I should have just asked him weeks ago, yet instead I figured that I knew what I was doing. This morning he had 4 pancakes, something that over the last few weeks would surely send him skyrocketing into the 400's. Today? About an hour and a half after his dose, he was 250. Wow. He really did need to have his I:C changed. We are now at 1:17 for breakfast and 1:22 for the rest of the day.

I hate being a bother, but I need to get over that and start using his doctor like I should. I need to stop assuming that he's going to be honeymooning for a long time.
Posted by Stephanie at 11:30 AM 6 comments:

Well, this is a first.

I'm downstairs, minding my own business, when I hear this random beeping. My spidey senses are tuned to all of the different beeps that my son emits, but this one was different. It wasn't Dex, it wasn't the Fur Elise of Adam's pump...it kind of sounded like his remote. Then I thought it was my washing machine. It, too, beeps lovely sounds when it is finished. I swear, I hear beeping in my sleep. The other night the smoke alarm started beeping and I was like, "CAN MY LIFE STOP BEEPING FOR JUST ONE HOUR???"

Then I  heard it again, so I went upstairs to investigate. It WAS Adam's remote...it was telling me "Total Daily Dose of 24 units exceeded. No Delivery."

First I panicked, thinking that somehow I had inadvertently given him a huge dose of insulin. Even though I was downstairs. Or maybe his pump unlocked and buttons got pushed.

So, I thought, well, Animas has 24 hour support, right? So I called and the nice lady told me that yes, indeed, it was his pump and he was not getting any basal because we had exceeded his daily dose. She walked me through the steps of increasing it and Adam is now getting his basal.

Then it kind of shocked me...I can't believe he went through 24 units of insulin today. I need to email his endo and get his basals fixed...he is definitely coming out of honeymooning, as his needs are steadily increasing. In some weird way, it makes me really sad to give him these huge doses of insulin. Kind of like, it doesn't seem as bad if he's just getting small doses...but now that he's needing so much more, it's hitting me that he is truly insulin DEPENDENT.

I've just been feeling kind of sad tonight about diabetes, especially since before I put Adam to bed, he says to me, "Mama, I know there will be a cure for diabetes someday. I will get rich and I will find a cure."

And then this...seems like T1D is slapping me in the face lately.

Man, am I ever glad I tried an arm site!!! His numbers are seriously rocking today. Could a site have that much difference in insulin absorption? Adam was waking in the 200's for the last week or so, and we've always done tummy sites. This morning, with his fresh arm site, he woke up at 134.

I was ready to email his endo to talk basal changes. Could new real estate be the trick? Sure, we've rotated on his tummy, but since our pump start in January, that's mainly where he's had them. Maybe his tummy needs a break?

Still not feeling the Dex love. Right now, it just alarmed that he was low, and he's at 164. Whatevs, Dex. You're acting like a bratty teenager just to spite me, I know it.

Carrie left a comment on my other post that made me think, though. Maybe I'm expecting too much from the CGM. After all, it is designed for ADULTS, not necessarily active preschoolers. Maybe I need to cut Dex some slack in that department. I'm sure it works great for adults 90% of the time, but for wild and crazy boys like my Adam...maybe not so much. He's going to bump it, bang it and just be rough, so it's not going to be perfect.
Posted by Stephanie at 2:52 PM 6 comments:

Okay, I lasted a day.

I caved. Well, actually, I really wasn't going to put Dex in today, but on the way to preschool Adam says, "Hey, how about if I get a Dunkin Donut as my treat after you put a new Dexcom in? I'll even let you put it in my butt!"

Well, with an offer like that, how could I refuse? ;)


So Dex is in the bum. We've waited the 2 hours. But I can't calibrate yet.

Because Adam's BS is 568. Yeah, you read that right. Obviously we've had a site failure, since after preschool he was in the 400's and I gave him a huge bolus to bring it down. Which it obviously didn't.

So I put a new site in. We tried his arm for the first time today. Some of y'all seem to have really good luck with arm sites, so here we go. Now I wait for his BS to come down so I can calibrate the G-D Dex and hope and pray that it works this week.

So fed up with Dexcom

I am taking a break from the thing. I will test his BG every 2 hours and log it. I am just DONE with the Dexcom that doesn't seem to work.

Here's what happens with ours. We attach the sensor. It works great for like one or two days. Then we get ???. Or we get a sensor failure. Or the transmitter falls off and we lose it. (yes, this has happened TWICE!) I've been on my hands and knees in my front yard searching for the G-D thing. Adam seems to bump it a lot when it's on his arm and the transmitter gets loose.

Or the sensor falls off when swimming. We swim a lot here, people. It's Arizona. I might as well not waste the money if it's not going to last this summer

I am just incredibly frustrated. Yes, I've called Dexcom and we've gotten replacements, but I can't do that every week obviously. After repeated sensor error 0's, it never calibrates right again. Does he not have enough fat on his body to get good interstitial fluid? Is he too rough on it? Am I doing it wrong? I seriously am at a loss.

Arrgh. For something that's supposed to make our lives easier, it is just NOT.
Posted by Stephanie at 5:32 PM 9 comments:

I feel like I've been absent from my blog for awhile.

And, also, my amazing sister gave birth to a beautiful baby boy on Monday, so I've been a little pre-occupied with my very first nephew. :)

We did have a great trip to Disneyland. I have to say, while diabetes was always present, it didn't rule our trip. I packed well, had plenty of supplies, although Dex crapped out on us after 2 days of swimming. I brought another sensor with us, but I chose to go without it because I knew we'd be swimming again and didn't want to waste another one. Mental note: we swim a lot in the summer, must find solution for Dex for that.

We had one moment that scared me and made me glad that we stayed on property at the Grand Californian. While in line for the Monsters Inc. ride, Adam began having severe stomach cramps. His blood sugar was high and he has NEVER acted like he was in so much pain before. The people in line behind us were so sweet and asking if he was okay and even asked us if he needed a snack because they heard us talking about his diabetes. :) We were able to get him back to the hotel quickly....and he proceeded to have a "moment" with the toilet. I've never been so glad to hear "Oh, it's not his blood sugar, he's got diarrhea!" You know, you've got to make light of the moments when they come. :)

After that, we were off again and honestly, he did really well the whole time. I increased his basal rates by 30% for our 6 hour drive, and I think that next time, I'll do 40% because it wasn't enough.

I'm not sure where I heard of these, but before our trip I ordered some temporary tattoos from SafetyTat. Adam doesn't wear a Medic Alert bracelet, because honestly....he's with me all the time! I was worried about the off-chance that he got separated from us at Disneyland, so these made me feel much safer. Adam is 4, so I'm not entirely confident of him telling people he's diabetic if he got lost, so this was great: 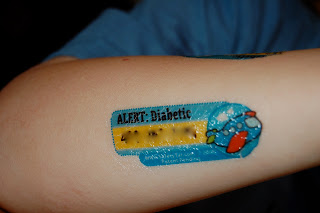 It's awesome - a temporary tattoo that says "Diabetic" and I added my cell phone number to it. I will use these a lot in the future, for school field trips, etc.

The best part was that we had so much fun as a family. It was a great trip and made me really happy. :) 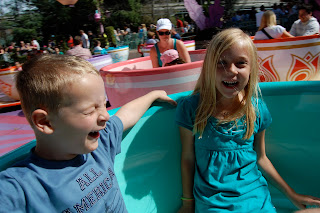 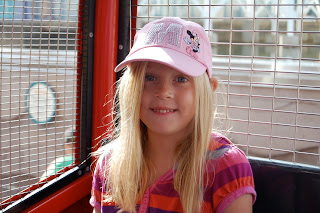 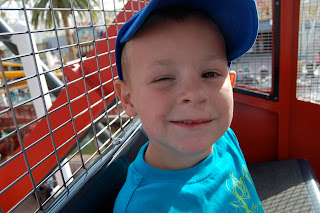 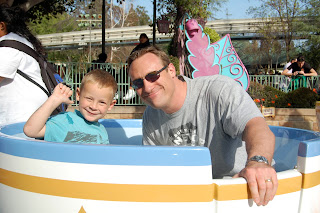 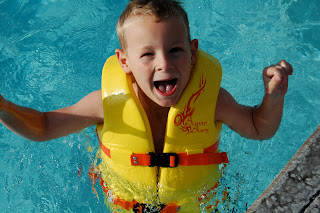 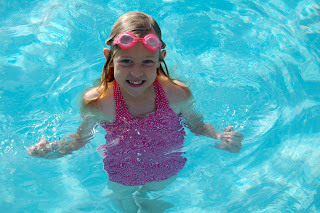 It was a great vacation. 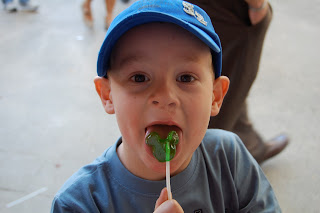 I will post all about our trip later, but we had a fabulous time! Diabetes was with us, but didn't define our trip. And in case you were wondering...Disneyland has carb counts on its bags of cotton candy! (Which we at a lot of). So, yeah, I basically poured sugar down my diabetic son's throat. But he had a ball. :)
Posted by Stephanie at 11:31 PM 4 comments: