Well, today was Endo day around these parts! I have to admit, I had no idea what the visit would bring. No clue what his A1c was going to be.

That's where the "ooof" comes in.

So, that's a bummer. But, I knew it wasn't going to be as good as last time. You've got the holidays thrown in there plus an entirely new insulin delivery system, going from Ping to Pod. Plus? He grew an entire inch in the last 3 months. Needless to say, I'm not surprised with our result.

Still, I said "Ooof" out loud when Dr. H told me his A1c. He laughed and said, "Really, that bad, huh?" His Dexcom graph from last week was a HOT MESS, I tell you. I said that out loud, too. :) I even had little red arrows on it, explaining all of our HIGHS and LOWS. Just so he doesn't think I'm a totally inept D-mom, you know.

We made LOTS of changes. Basal and I:C ratios. He is now at 1:14 for the morning mealtime hours and 1:16 for the afternoon/evening hours. Which is a pretty big jump, so I am going to have to be on his numbers like white on rice these next few days.

So there you have it. Our report card for the last few months. It certainly wasn't pretty, but I'm confident (sorta?) that we can get better from here.
Posted by Stephanie at 5:25 PM 7 comments: 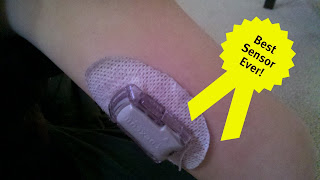 This has been an interesting diabetes week in the Drew household. We've had low lows and high highs. But things have gone swimmingly thanks to my new buddy.

For those of you who have followed our journey, you know of my intense love/hate relationship with Dexcom. It just never worked well for us. We'd get 2 or 3 good days out of a sensor, then ??? or a sensor error.

This little wonder? Has been SPOT ON. I mean, numbers matching EXACTLY what his PDM says. For an entire week! So this is what y'all rave about!! We've finally experienced Dexcom nirvana after a year and a half. Usually we lose control with Dex after a fast drop or a fast rise:

Not this time, baby! Dexcom actually did what it is supposed to do. It helped me see this wicked fast drop, then allowed me to treat before he dumped further than 94 and he leveled off in the 140's for the night.


This week Dex was much needed. Adam had to go under anesthesia on Tuesday for an eye procedure, and Dex was right there, which the anesthesiologist loved. I was able to see that he was dropping before the procedure, so I could effectively temp basal (no food/drink after midnight) and I saw a slight rise in BG from his anxiety right before and after. We also had a cannula pop out yesterday (hence, that HIGH on the Dex above!) and while I rage-injected...I was able to head off the impending low.

The planets aligned for us this week. No, D didn't behave (it never does) but at least this week I had an extra friend to help me out with it.

Dex, won't you please be good forever? I promise I'll give you lots of gold stars. :)
Posted by Stephanie at 9:50 AM 4 comments:

I just found Melissa's blog - Shots for Sugars - and wanted to have y'all go over and give her a big DOC welcome! Her 3 year old daughter, Sierra, was just diagnosed late last year.

Welcome, Melissa! I think you will find the diabetes online community to be a wonderful place full of great people, stories and advice. Having a little one with diabetes is tough - us d-mamas have to stick together!
Posted by Stephanie at 11:36 AM 3 comments:

You know how it's been a long time since you've blogged...and you keep meaning to do it, but then you can't think of anything to say...even though you have a lot to say?

I guess that's what they call "writer's block," eh?

Anyway, I was reminded that "I really need to blog about OmniPod" after reading Kristen's post today about their switch from Ping to Pod.

So, it has been exactly 1 month since we started podding. Dang, it seems like it's been A LOT longer than that! Because I think I totally grew some grey hairs during this past month. The good news is that podding is finally going really well. Really well. Aside from those pesky post-pod-change highs (I'm still too squeamish to go full blast on the temp basal, but it bites me in the ass every time) things are evening out.

We had quite a few pods rip off for various reasons - I swear, my kid just has a knack for pulling out insulin pump sites. But, now we've realized that tape is a must (Hypafix seems to be working well for now) and if we do that - we're golden for the full 3 days. I also bought an arm band from Bands 4 Life, but he doesn't love it so much. His favorite site is still his belly. The 2 times we've tried his rear end, we've gotten blood in the cannula, so I think we may have a "clencher" on our hands. :)

There were plenty of times I was ready to drive over the pods with my car, and slap his Ping back on him, but I'm glad we stuck it out, because Adam loves the OmniPod. In fact, he has become so much more involved in his own care than I ever thought he'd be at 5 years old. Last week, I was upstairs and he asked for a snack. I was busy, and I said, "Not now - just wait until I can come down and bolus you." And he says, "No ma....I can do it!" I hesitated for a split second and then I thought, what the heck? So he yelled to me that he was going to have a granola bar and told him to bolus for 17 carbs. And he did it!! Of course, I ran right down to check, and I saw that it was delivering the appropriate amount of insulin. He was so proud of himself! He liked it so much, the nurses at school have had to practically wrestle the PDM away from him so THEY can practice bolusing him! It has given him great independence and a sense of ownership over his diabetes that I think he didn't have before.

I was also able to let him go to a playdate at a friend's house the other day - I know the mom fairly well, but she had never cared for Adam before. She called me when Adam wanted a snack and he tested himself while I was on the phone with him, and then bolused for the snack! I had done the calculation in my head, and double-checked with the mom that it was delivering the right amount. It was another great milestone for us.

So, I have to say that now, I do love OmniPod, mostly because it has given Adam a lot more confidence in handling his diabetes. Now, granted, I do 98% of the finger sticks and bolusing, but it is great that he has an interest and CAN DO IT if he needs/wants to!

In December, we realized our transmitter was NOT working well on the Dexcom. Fortunately insurance paid for a new system, so we are using Dex again. And it has been spot on for the most part, which has been a comfort during this transition period.

Adam sees the endo here in a couple of weeks and I'll be curious to see what his A1C is. If I had to guess, I think it will be up a bit, since we had a rough go the last few months.

So, that is our update. Hopefully it won't be another month before I blog again... :)
Posted by Stephanie at 10:14 PM 20 comments: