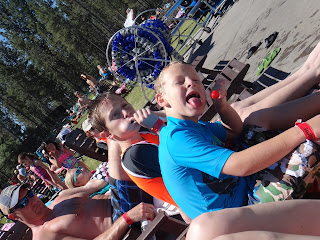 What a night. Adam was high, high, high all yesterday, despite repeated corrections and temp basals. Jason had taken the kids bowling and to dinner last night so I could have some "alone time" and an hour into it, I get a call saying, "He's 489, his pump is empty and we are about to eat pizza and ice cream."

I drove the 20 minutes to where they were with 2 pods and a fresh vial of insulin. Good thing I packed 2 pods, because the first one screamed while priming. After I loaded it with 150 units of precious insulin, of course.

After giving him a ridiculously large dose of insulin, the night ensued with many lows (of course!)

I'm tired. Every once in awhile I get sick of it all. This is one of those times.

His numbers are a mystery to me lately. I know his A1c in August is going to suck. I keep trying to make changes, but I feel like the further along we get on this ride, the less I feel like I know.

To make matters worse, HE is sick of it. He used to just go with the flow and be so easy about it, but now even simple things send him into a tailspin. God forbid I have to give him an actual injection with an insulin needle (he seems to think those hurt worse than a pod change.) The other night I had to wrestle him to his bed, sit on him while he was crying and I was crying to give him an injection because his pod didn't seem to be working.

It seems like it's getting harder as he gets older.

One day a few weeks ago he said, " I wish I was never born." When I asked him why, he said, "because then I wouldn't have diabetes."

To make matters worse, diabetes is not the only thing he has to deal with. Which makes this just that much harder for all of us. I have all but given up patching his bad eye because...just how many things am I supposed to fight him on?

We have known for a long time that the next phase in his cleft lip repair was coming - and it is approaching soon. In October, he will have his bone graft. Taking bone out of his hip to be placed in his gumline. Along with a little lip revision.

He is NOT happy. And how can I blame him? He's had plenty of surgeries before, but he was younger and was unaware. I'm ashamed to admit that I would never really tell him about them (they were minor eye procedures) and we'd just show up at the hospital at 5am and get it over with. But now he pays attention during dr. appointments. He KNOWS what is going to happen.

After the surgery, he will be on a liquid diet for a week. Then soft foods for a MONTH. How the hell is diabetes going to figure into THAT hot mess?

No recess or sports for six weeks.

Shit, I just realized that he will not be able to do the soccer I signed him up for a few months ago!

So it's not just diabetes. It's all of it. I need to find a way to make him okay with all of this and frankly, I'm at a loss.