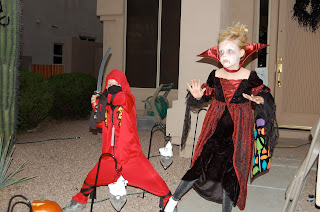 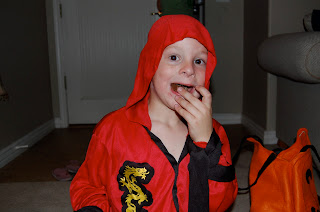 Last year at this time, I was nervously handling our first Halloween with diabetes. Adam was honeymooning, and if I recall correctly, he went low even with all the candy and activity.

This year? We rocked it. With a pre-trick-or-treating number of 111 (gave a mini pack of Reese's Pieces before we started walking) and a BG of 131 at the end of trick-or-treating - we did damn good! He had some candy before bed and his bedtime number was 188, with a little less than a unit on board, so we were good to go. Such a relief to be on "this side" of diabetes this year and not just starting out. And the pump! So much easier to have that this year.

Adam was a Ninja (couldn't you tell from his POSE??) and Sydney was a vampire girl. Loved that I was able to put some makeup on her for the first time ever. They had so much fun and it was a great night!

Happy Halloween to the DOC!
Posted by Stephanie at 9:10 PM 2 comments:

I guess it takes a lot to get me to blog these days! Life has been very full and busy. :)

But I have some wonderful news that I just had to share with the DOC. Adam had his quarterly endo appointment today, and I was STUNNED to hear that Adam's A1C was 6.9.

That is the lowest he has ever been, and I've had a perma-grin on my face ever since. It's funny how such things can make you so happy. I believe his last A1C was 7.6 or so.

I'm sure that at our next appointment, the number will be up again with the holidays rolling around, but for now, I'm going to bask in the glow of Adam's first A1C under 7.0. :)

We do have two other issues we are looking into (it's always something, isn't it?) The first thing is that Adam has had some wicked B.O. the last few weeks. Is that TMI? I'm sure he'll kill me when he's older. But...from what I understand, 5 year olds should not have that kind of stench. Even active little boys like mine. He doesn't have any other symptoms of precocious puberty, but his endo is doing a bone x-ray anyway just to check it out. I fully expect it to be fine, but I figure since he sees an endo regularly anyway, I thought I should mention it.

The other thing is from his labs - it turns out he has a very low IgA level and could be IgA deficient. Does anyone know anything about this? I read that kids born with low IgA levels are more prone to autoimmune diseases (um, duh...already got that one covered!)

I know that a low IgA level could point to Celiac, but he did test negative, even after looking at the IgG levels. So, at this point there is no Celiac. His endo said that having a low IgA level could just mean that he is going to be more susceptible to illnesses, but luckily (knock on wood) so far he's been healthy. Anyway, just curious if any of your kiddos have tested low for this.

Other than that, things are chugging along around here. Can you believe it is almost NOVEMBER? Yikes.

We are loving our little kitty - she is so much fun! The kids adore her and she's been a nice addition to our family.
Posted by Stephanie at 8:10 PM 10 comments:

Nah, not pregnant...but this week, we got the next best thing: 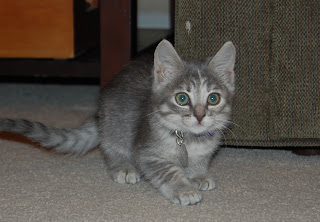 She is 2 lbs. of adorable fun - we adopted her from the Humane Society on Thursday, and she has already brought such JOY to our home! 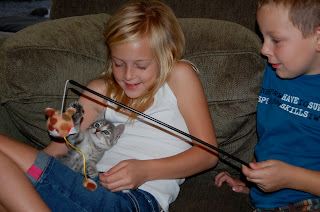 If you know me in real life...you will know that I have long-maintained a "no pet policy" in our home. Don't get me wrong...I love animals! My parents have 2 of the sweetest golden retrievers, and I love them...I just don't want to take care of them. But, as often happens...my kids wore me down. And my husband caved. And really, they deserve to experience growing up with a pet. Since we had cats when I was growing up, I figured that would be the best (read: low maintenance) pet for us.

We spent the last week searching for the perfect kitten for us - we went to the pound, and multiple Humane Society locations until we found Macy - a 7-week old little furball. She is SO much fun - and tolerates the kids handling her and playing with her so well.

Don't tell anyone, but I've never seen my husband so googly-eyed over another living thing...I even think he wasn't this crazy about our kids when they were babies!

So that has been keeping us busy! She has been a great addition to our home, and I am so happy we have her.
Posted by Stephanie at 6:45 PM 5 comments: