You know what they say about the best laid plans...

When we last heard from our fearless mama pancreas, she was counting down the minutes until her kid and diabetes-free weekend....one should know that diabetes always manages to fuck things up.

I have to say that we did manage to have a totally awesome day on Saturday. Pool time with margaritas, some window shopping, a fab dinner at a steakhouse with lots of cocktails, the movie Bridesmaids (which was so freaking hilarious that I needed my asthma inhaler - you must run out and see it!) then some blackjack with friends at the Talking Stick casino. We packed it in and I'm glad we did because little did I know that my poor mama was up with a puking Adam all night.

Bless her heart, she endured 3 puking sessions, bruised her tailbone after falling on the tile after slipping in his mess, plus taking care of Sydney, who was freaked out as well and couldn't sleep. She has earned her D-Nana badge. :) She called us at 8am to let us know what was going on, so we high-tailed it out of Scottsdale and back to Mesa. I just had a feeling this was not going to end well, and since I have read that so many diabetic kiddos with the stomach flu end up in the ER, I wanted to get to him fast.

Starting out, he had a BG of 90 and his ketones were 3.4. That freaked me out a bit, because since he was diagnosed, no matter how high he was, he's managed to avoid ketones. And he was totally unable to keep anything down. The last thing my mom tried was a popsicle that came right back up. I called our on-call endo, and he said to give him a 2.0 unit correction and try to get him to get any kind of sugar into his system. He said if he didn't improve within an hour, to head to the ER because the ketones are what we need to take care of.

We could not get him to eat/drink ANYTHING - poor kid was totally freaked out that he was going to puke again and Dex said his blood sugar was heading downtown to Chinatown...so I made the executive decision to just take him to the ER.

I have to admit, going to the ER with a diabetic kid is like having a Disney FastPass...they just swoosh you right in and into a room! And they have some stellar puke bags...I had a moment where I wanted to steal some to take home for later. :)

By now his BG was 50 and ketones were 3.5, so they got him hooked up to an IV drip with Dextrose, Zofran and saline right away. He was such trooper for the IV! The J-tip thing is awesome and honestly, you know what he was scared of? He was afraid the doctor was going to swab his throat for strep. LOL! He'd rather get an IV than that. My sweet, weirdo kiddo. 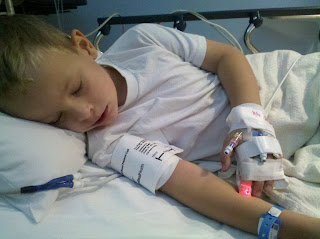 He was feeling pretty miserable, but we watched some Spongebob on the iPad and he took a little snooze. After a few hours, he tried some pudding and that stayed down and he had some Gatorade, but his BG was still dropping so, I asked that they give some more Dextrose. I have to admit, they were great about letting me be the "mama pancreas" and ask for what I'd like them to do. Before we were discharged, Adam was complaining of more stomach pain, and HE asked the doctor for more zofran in his IV! And by golly, the doctor did it. :) We are home now, and while he perked up for a bit, he's back to feeling bad - mostly just stomach pain, but no more vomiting. I think he just feels pretty wiped out, and he keeps saying he's feeling "weird." And he's really scared he's going to throw up again. I hope he gets some good sleep tonight. I just tested his ketones and he's at 0.0, and his BG is steady at 150ish, so I'm good with that. I'm typing this from the floor of his bedroom, because he's scared to be alone.

I knew the stomach flu was inevitable, as was our first ER visit. It happens to every D kid at some point, I'm sure. I'm just surprised because neither one of my kids has ever had the stomach flu before! But hey, a first time for everything right? I'm so very glad we did not go OUT of town for our weekend and were able to get to him quickly.

Thanks to all my Facebook D-mamas for giving me great advice today. As we were driving to get Adam, my husband was asking me who I was texting...and I said, "I'm asking my D-mamas what to do!" He thought that was pretty cool...especially that I got so many responses so fast. So thank you, ladies! You rock. :)
Posted by Stephanie at 9:20 PM