On Saturday, Adam had a play date with a friend from kindergarten. We've had his little buddy over quite a few times, but this was the very first time he was going to his friend's house to play. And admittedly, I don't know the mom *that* well, but we've had quite a few great conversations and she was so open to learning about what she needed to do for Adam to hang out over there. I had a good feeling about it, so I dropped him off and gave a few instructions and I am proud to say that it went so well!

We have his Dexcom in this week, so that helped. :) When I dropped him off, his BG was 195, and I was good with that, because I knew they were going to do the slip-n-slide in the backyard. I got one text from the mom about an hour and a half into it, and she said that he was 209 and they were having snacks. I didn't ask what they were eating...but I knew Adam was going to be just fine. She texted me again and said that Adam asked for the carb counts for everything they ate and bolused himself for everything! She was impressed he knew so much. :) When I looked at his PDM, I saw there were 3 boluses...and he obviously did a great job because when he got home, his BG was 167.

I told him how I was so proud of him for doing such a great job and for knowing exactly what to do. And he looked at me and said, "Well, MOM...you taught me how to do it....duh!!"

Well, I guess I did! I know we do this every day, but honestly at 6 years old, I do 95% of his care, because I don't want to burden him. But knowing that he is moving towards being able to care for himself? Amazing. Sad in a way that I feel like it is A LOT for a 6 year old to have to deal with, but I'm so proud that he can do it and doesn't seem to feel like it is a burden at this point.

I am enjoying having the Dexcom back - I think I will be using it more this summer. When it is working well, I notice we aren't having to test him as much and since we have been running out of our allotted 300 test strips each month, that is a blessing.

Last night we went on a night hike - scorpion hunting! It was so much fun (even though it was still blasted hot out!) and I didn't worry one bit since Adam had his Dex on. We saw lots of these little critters: 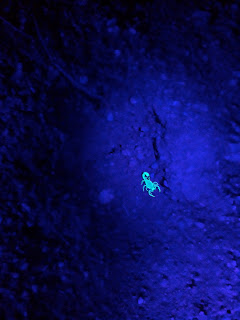 I am also loving the fact that our cat likes to catch scorpions. The other night I was on the couch and I saw Macy playing with...something...right by Jason's chair. I looked a bit closer and saw she was tangling with a scorpion! I told my barefoot husband to go get a big shoe...and we took care of it. Just a few "perks" of living in the desert, lol! 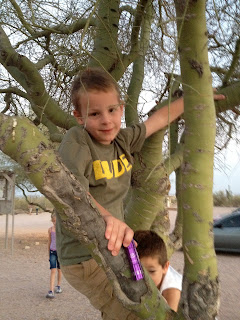 I am so proud of my boy. Sure, he drives me cuh-ray-zay sometimes, but in a way, having diabetes makes him a much more mature kid at times (AT TIMES...the kid can fart on command like nobody's business) I hope that I can keep a good balance for him of teaching him how to care for himself....while still letting him be a kid.

It's a hard balance, but at this point, I'm feeling good about it.
Posted by Stephanie at 6:58 PM