Our walk was a week ago? Sheesh. We had a super busy weekend and week, so I'm finally getting around to some posting. And, also? Adam's numbers are completely whackadoodle. I have no clue what is going on. More on that later. 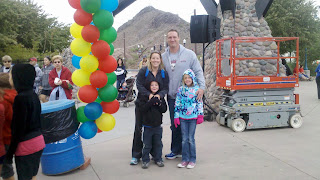 It was a little chilly on our walk day! And it was wonderful. The ground was soggy and Adam had mud all over his body within 5 minutes, but he loved it. We had a small group, but Adam was SO THRILLED that his best buddy from kindergarten came to walk with us. How cool is that? His mom is familiar with Type 1, and has been so supportive and interested in what we do. The fact that she brought her son and little girl out on a cold, wet morning meant so, so much to me. I mean, we all know how rare it is when you tell someone about Type 1 Diabetes and they "get it" right away...but she did. 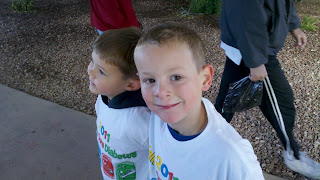 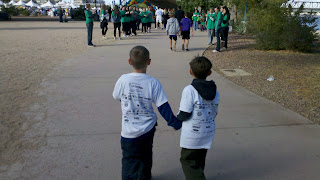 How cute are they?? Adam loves his friends fiercely, and this little guy loves him right back. Makes a momma swoon.

It was a nice family day. After the walk, we checked out the booths and Adam got a cool new "camo" skin for his meter and pump while I was talking to the Animas guy. See? 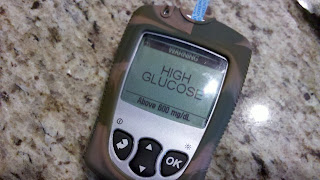 So, here I am talking to the Animas guy about how Adam MAY or MAY not have a hairline crack in his pump, when my husband comes bounding up behind me with a fistful of Omnipod stuff, yelling, "Hey! HE SAID WE CAN SWITCH FOR ONLY $150!"

Yeah, so at that point I pretty much grabbed the camo skins and ran. :) Insert foot in mouth, much?

The Omnipod discussion is for another blog post, entitled, "The One Where My Husband and I Argue About Pumps."

Anyhoo, we enjoyed some free food, free stuff and fun music. And then enjoyed doing a site change in the back of the SUV on an EXTREMELY cranky boy who was high even after the bounce house (this is called foreshadowing.)

But never fear...his sister had him laughing by lunch time: 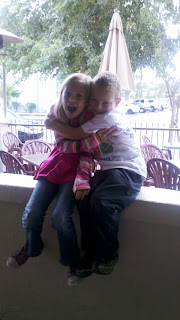 Okay, so this post is all over the place, but I'm just going with it.

WHACKADOODLE = Adam's numbers. During and after the walk, he was high. 300's high. Sure, he had a little cold, but what kindergartener who is in a cesspool of germs 8 hours a day doesn't? All weekend, and on Monday, I kept correcting, doing temp basal increases, you name it. Then Tuesday came. At his 9am check, he was 474. Full insulin dose for snack (we usually do half because of recess) and correction. Lunch, he's still at 380-something. Then at 12:30, he's back in the 400's and I pick him up from school after doing another site change and correction.

Then, about an hour after we get home, I get this:

Never have seen that before and it scared the shit out of me. And no ketones! (an aside...you all of your kids automatically get ketones when they are high? Adam never, ever does. Even after days of being high. Is that weird??) He said he had a tummy ache, but that was it. I ripped out that site, put a new one in his tushie with a fresh bottle of insulin AND gave him an injection. Which he totally hated, by the way.

But, WAIT! Guess what is behind Door #2 at bedtime?

And now, ever since Tuesday, his numbers have been all wrong. No rhyme or reason. Nothing. High last night, low tonight. Why, why, why? I just don't get it. It's like that wonderful A1c we just got is mocking me.

Yes, Diabetes mocks me.
Posted by Stephanie at 10:07 PM