Coming up for air

It seems as though a lot of us are feeling this way lately - beaten down by life and seemingly unable to catch a break. The last few months have left me feeling a bit depressed and defeated. Whenever I have one thing licked, something else rears it's ugly head.

I'm a worrier. Stone-cold fact. I'm not going to change that about myself, but I feel like lately I have SO much to worry about! It has been a bit overwhelming. The last 6 months have not been a terribly good place for me.

We've had illnesses, spring break, more illnesses, a broken bone and a broken down car. Both kids tested positive for strep right before we left on our spring break trip to Disneyland, so that was lots of fun. Liquid antibiotics are a messy thing to travel with. :) We had a good time, despite exhausting ourselves. Both kids rode their first roller coasters and loved it. Sydney even progressed to Space Mountain. Tower of Terror did her in, though. :) 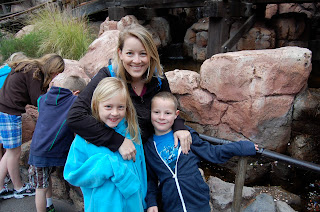 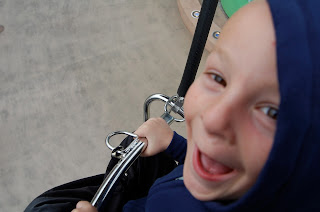 We came home to a few days of rest, then Adam came home with this:

He broke his wrist falling off the monkey bars at school. It's not a terrible break, thankfully, but enough to be totally annoying! He is SO BUMMED to be out of PE for a month.

Sydney has been sick and had some issues as well, that have taken up a great deal of my mental energy. Both kids came down with one of those random childhood illnesses last week - Fifth's Disease. It was a game of "what rash is this?" until Adam showed up with the "slapped cheek" look that was a dead giveaway.

I'm tired. I'm oh-so-tired. Which is why I haven't been blogging.

I'm slowly starting to come back to life, but it has taken some time. In all honesty, diabetes has been on the back-burner for a few months, which in a way I think is healthy. I take the number...deal with it...and move on. But it's always there - like tonight when Adam was having fun outside with the neighbor kids and I took it for granted that he was okay. He came in at my insistence, and his BG was 43. It's always there, lurking in the background, no matter how much I try to ignore it. Or in the middle of the night when he calls for me at 2am...asking me to check his blood sugar because he feels funny. It's always there.

This week is a busy one - my sweet, awesome, wonderful little boy turns 6 years old on Friday. Yep, the 13th! Sure, he has his moments sometimes, but he has a genuine heart of gold. This week is all about him, and I am super excited for his party on Saturday!
Posted by Stephanie at 8:23 PM