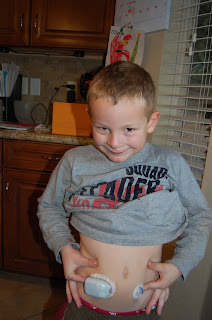 After being on the Animas Ping for a year, and having our own struggles with that, I wasn't naive enough to assume that switching to OmniPod would be smooth sailing. But I did have a teeny, tiny hope deep down inside that it would rock our world (in a good way, of course!) I didn't expect a bent cannula, blood in the NEXT cannula and a ripped-off pod in the first week alone.

I have come to the following conclusion: All artificial insulin delivery systems suck ass in their own special way.

Sigh. Don't get me wrong. The pod is super neat. I like love the PDM. The bright screen, the intuitive software. It's awesome. I'm working around the lack of IOB just fine (although, he's been so dang high, that has NOT been an issue.)

There are a few things working against us, I suppose. It's been an exciting week (Did ya'll hear that it was CHRISTMAS??!!) He's complained of pain in his legs, which always mean GROWING pains, which means basals probably need to be increased.

I put his Dexcom on him for the first time in months, but it's been giving me the ol' three-question-mark salute every night when I need to see what is going on. We should have a whole new Dex system arriving tomorrow, since our warranty expired on the old one and I suspect our transmitter is just kaput.

Do you guys ever just feel like saying F&%$ it, and go back to shots? Because man, MDI seems so much easier at the moment. There are fewer variables. You KNOW the insulin is getting in. There's no bent cannula/blood in cannula/ripped site or pod crap.

So the verdict is in. Pumps are a wonderful tool in delivering insulin, but they are all far from perfect.  Adam, on the other hand, enjoys being free of the tubing so much, that we are going to keep "podding" along until we get it all figured out.